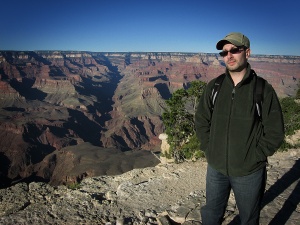 It was to be the ultimate road trip. We were to travel across the country with our final destination being the Southwest– specifically around the Four Corners region. My friend and I had recently been snatching up medium format equipment on EBay for next to nothing. We’ve wanted to own this type of equipment since our days working in the Wright College photo lab. We had each purchased Mamiya M645 cameras, complete with prism viewfinders and a few lenses. I had also picked up an old, but beautiful Yashica D twin lens reflex camera similar to the Yashica Mat 124g’s that we rented out to students in the lab.  It seemed like it was all coming together.

We each purchased about 40-50 rolls of film, both black and white and color, especially Kodak Ektachrome VS . Just for ‘fun’, I brought along my old Minolta SRT 102 to shoot candids.  I felt like we had the stuff to photograph the Southwest ‘right’.  As soon as we began shooting,  we both realized we were somewhat unfamiliar with the new equipment. This was bad.  I, for one, was used to using 35mm autofocus (a Canon EOS Élan II to be exact). I hadn’t used a handheld light meter for years– hell my Canon had a very sophisticated metering system that made things so automated for me! There was also the issue of bringing along bigger, bulkier equipment and tripods.

Subjectively, I saw plenty of oppuntunities out there. Some of the things we encountered were breathtaking. We could not wait until we got back to see all that we had accomplished. About two weeks after we returned, I sent out the film and had it processed. When I saw the proofs and transparencies , my heart sunk; Is this it? The exposures on many to the transparencies were way off. The negatives had promise, but a lot of theses were dense due to shooting in the bright sun most of the time.

Was this a waste?  The part I remember most was using the Mamiya at Monument Valley and standing next to an older gentlemen with a digital SLR. He didn’t have to wait to see if the shots came out–he just viewed them back on his LCD screen. No developing, just a couple of compact flash cards. Disgusted, I put those negatives and transparencies in a binder and did not look at them for several years. Then, a few months ago, I decided to take another look, since I was unearthing the old Urban Views material. Being away from it helped me see the possibilities now. Sure, the images needed a lot more work than I was used to these days, but I felt that the good ones needed to see the light of day. These are the good ones: Shot with primitive equipment, post processed in Photoshop.

One year later, we went back a revisited some of these places (along with some new ones) armed with digital cameras. The bulk of the Southwest images found here are from the digital files unfortunately .